The growing generation of genomic data motivates the adoption of the scalable distributed computing systems already in wide use in other “big data” domains. ADAM is genome analysis platform built on Apache Avro, Apache Spark and Parquet. We have been experimenting with porting existing genomics tools to ADAM. Our Distributed Exome CNV Analyzer, or DECA, is a distributed re-implementation of the XHMM exome CNV caller using ADAM and Apache Spark.

These efforts are described in the following publications:

PeopleSeq is a longitudinal study of ostensibly healthy adults who plan to, or have already received, their own genomic sequence information. The PeopleSeq study is the collaborative effort of a growing consortium of commercial and research organizations. The PeopleSeq study will collect valuable empirical data on the medical, behavioral and economic impact of performing predispositional personal genome sequencing (PPGS) in ostensibly healthy adults.

PeopleSeq is described in the following publications:

There is an acute need to develop more effective genomics education to train the next-generation of genomics professionals. With a multi-disciplinary group of colleagues at the Icahn of School of Medicine at Mount Sinai, I co-developed and directed a laboratory-style medical genomics course (first taught in 2012), in which the students have the opportunity to sequence and analyze their own whole genome. The results of our companion research study evaluating student attitudes towards and the outcomes of incorporating personal genome sequencing into graduate genomics education are described in the following publications:

To support hands-on genomics education, I developed the MySeq web application. MySeq is a web-based, privacy protecting, personal genome analysis tool inspired by GENOtation (previously the Interpretome) and DNA.LAND Compass. MySeq can load and analyze Tabix-indexed VCF files stored locally on the user’s computer or available remotely. Queries and other analyses will only load the necessary blocks of the compressed VCF file, enabling efficient analysis of whole-genome-scale VCF files. MySeq has been used in the CSCI1007 “Practical Analysis of a Personal Genome” winter-term course at Middlebury College. MySeq is described in the following publication:

HealthSeq is a longitudinal cohort study at Mount Sinai in which unselected ostensibly healthy participants received a variety of health and non-health-related genetic results from whole genome sequencing. The primary aim of HealthSeq is to improve our understanding of participants’ motivations, expectations, concerns and preferences, and the impacts of receiving personal genome sequencing in a pre-dispositional setting.

HealthSeq results are described in the following publications:

I developed the Genome Analysis Pipeline (GAP) used by many groups at the Icahn Institute for Genomics and Multiscale Biology at Mount Sinai. The GAP was validated for clinical use in New York State and has been successfully applied to identify causal mutations in multiple patients. The GAP is used in multiple small and large research projects, totalling many thousands genomes, exomes and targeted panels.

The GAP is described in the following publications:

Weighted Gene Co-expression Network Analysis (WGCNA) is a methodology for describing the correlation patterns among genes across microarray samples. Analysis of tens of thousands of probes, however, can take hours and requires hundreds of gigabytes of memory, putting this method out of reach for all but a few organizations and applications. Coexpp substantially reduces in the execution time and memory footprint. Those reductions will enable to researchers to apply WGCNA in many new contexts.

Recent advances in flow cytometry enable simultaneous single-cell measurement of 30+ surface and intracellular proteins. In a single experiment we can now measure enough markers to identify and compare functional immune activities across nearly all cell types in the human hematopoietic lineage. However, practical approaches to analyze and visualize data at this scale are only now becoming available. SPADE, described in Qiu et al., Nature Biotechnology 2011 and first used in Bendall et al. Science 2011, is a novel algorithm that organizes cells into hierarchies of related phenotypes, or “trees”, that facilitate the visualization of developmental lineages, identification of rare cell types, and comparison of functional markers across stimuli.

CytoSPADE is a robust, modular and performant implementation of Qiu et al.’s SPADE algorithm, including a rich GUI implemented as a plugin for the Cytoscape Network Visualization platform. CytoSPADE is 12-19 fold faster than the SPADE prototype, ensuring that users can run complex analyses on their laptops in just seconds or minutes. More information is available on the software page. 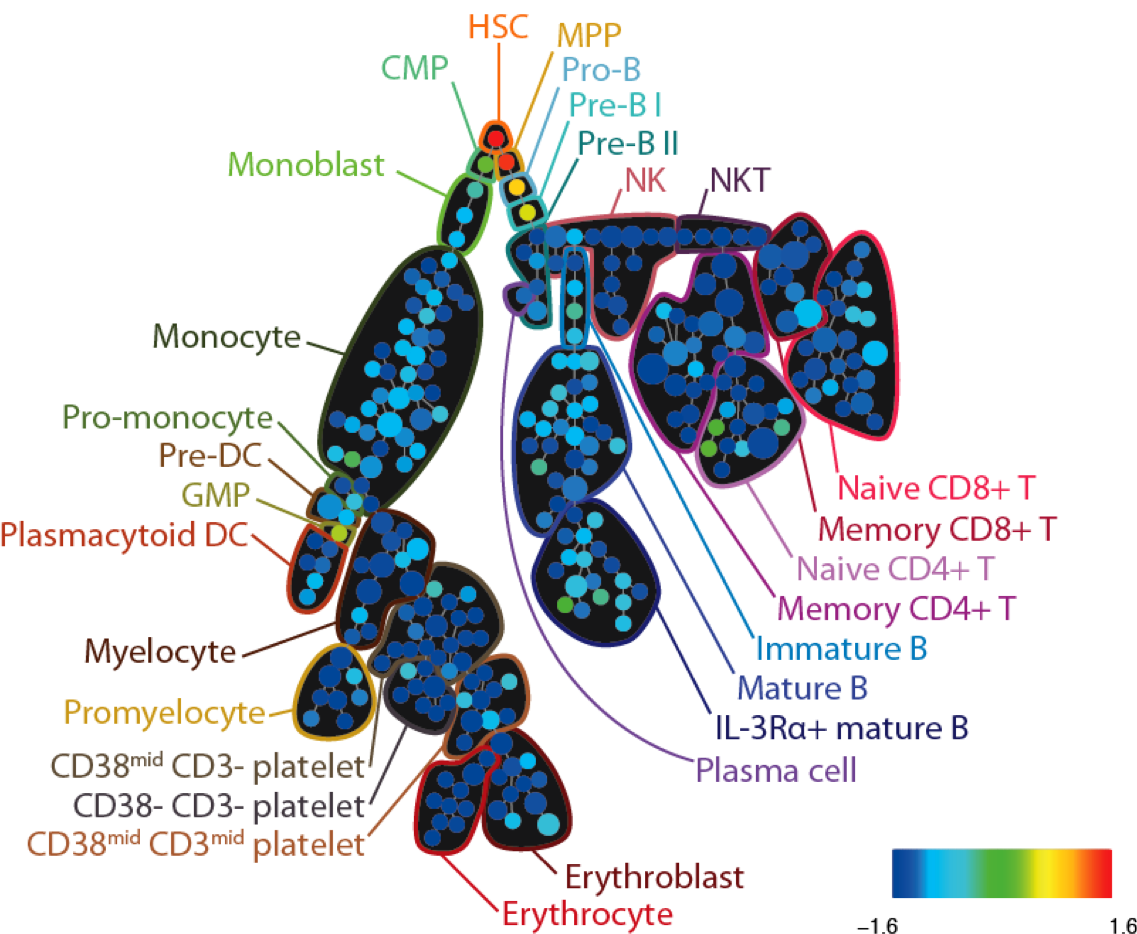 CytoSPADE is described in the following publications:

Aberrant intracellular signaling plays an important role in many diseases. The causal structure of signal transduction networks can be modeled as Bayesian Networks (BNs), and computationally learned from experimental data. However, learning the structure of BNs is an NP-hard problem that, even with fast heuristics, is too time consuming for large, clinically important networks (20-50 nodes). I developed a novel graphics processing unit (GPU)-accelerated implementation of a Monte Carlo Markov Chain-based algorithm for learning BNs that is up to 7.5-fold faster than already heavily optimized general-purpose processor (GPP)-based implementations.

The GPU-based implementation is just one of several variants within the larger application, each optimized for a different input or machine configuration. I concurrently enhanced the Merge framework to enable efficient integration, testing and intelligently selection among the different potential implementations targeting multicore GPPs, GPUs and distributed compute clusters.

The GPU-accelerated Bayesian Network learning implementation is described in the following publication:

For x far from the origin, this computation can be approximated as 0 or the identity function. The choice of those boundaries creates a performance-precision trade-off. I concurrently developed a tool, Gappa++, for analyzing the numerical behavior of this and other computations. Using Gappa++ I as able to improve performance an additional 10-15%. Gappa++ is described in the following publication and on the software page:

Merge is a programming model for building applications that will tolerate changing hardware. Merge allows programmers to leverage different processor-specific or domain-specific toolchains to create software modules specialized for different hardware configurations, and it provides language mechanisms to enable the automatic mapping of the application to these processor-specific modules. I showed that this approach can be used to manage computing resources in complex heterogeneous processors and to enable aggressive compiler optimizations.

Sketch of the Merge framework

Merge was used extensively if the complex and computationally intensive Bayesian structure learning application described above. Using Merge we were able to deploy a single application binary that could deliver the best possible performance across a range of problem sizes and hardware configurations (including multicore processors, GPUs and clusters vith MPI). For any given problem size and hardware configuration, the Merge-enabled application automatically and dynamically selects the appropriate implementation (based on predicates supplied by original implementors).

Merge is described in the following publications: