In this assignment, you are going to continue the thread of the last assignment and again rip an image apart and then put it back together again. However, this time you are going to do it at a pixel level. In fact, you are going to construct a Markov chain that provides a statistical model of the relationship between colors in your image. More concretely, given a color from the original image, your model will know the probability of some other color being its immediate neighbor.

Markov chains, as you may know, are a state-based, stochastic model of possible sequences of events in which the probability of a particular event happening (and the accompanying state transition) is a function only of the current state. You will use this to paint your picture one pixel at a time. The state of the model tells you the current color to paint. As you walk across the canvas, advancing to the next pixel, you will pick the next color based on the probability of it being a neighbor of the current color.

As an example, given this input image (which is a basic visualization of hue and saturation in HSB): 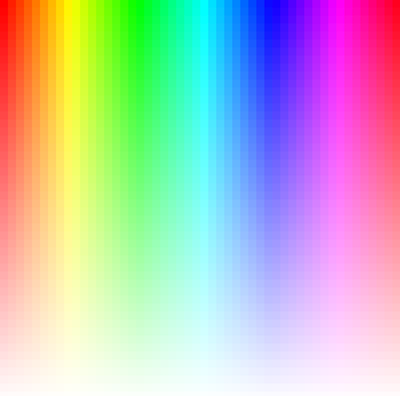 This is an example of what you might get:

There are two parts to this assignment: building the model, and painting the image.

After loading the image, the algorithm for building the model is fairly basic. Under the hood, you need some way to store a collection of keys (states/colors) and associated values (the list of colors that have been observed in neighbors). While you could use a simple JavaScript object, I suggest you actually use the Map data structure.

To store colors, I suggest converting to a string representation of the form "rgb(0,0,0)". This can be passed to any of the p5.js color functions and is in a convenient form for making comparisons.

There is a bit of cleverness we can use to record statistical likelihood. Imagine you are on a pixel that is red (R), and its four neighbors are green (G), blue (B), green (G), and white (W). So, given R, there is a 50% chance that the next color will be G, a 25% chance that it will be B and a 25% chance that it will be W. You could record these percentages and update them as you found new instances of R. However, a simpler approach is to just put the colors in a list allowing for duplicates ([G, B, G, W]). Now, if you randomly choose an element from this list, the probability of choosing a particular color matches the observed probability. This does require significantly increased space, but provided you have the memory, it makes the math easier.

The algorithm is then fairly simple:

Having built the model, there is a variety of ways that you could make use of it. A naive approach would be to start in one corner and fill in the image row by row. However, this would result in a fairly boring image and there would only be correspondence along the row, but not between rows. Another approach would be to do a random walk around the canvas. This actually looks pretty interesting, but is not a terribly efficient way to fill the space. The most interesting seems to be to do a stack-based flood fill.

To implement this, you will need a stack (JavaScript arrays already have push and pop functions) and a way to keep track of when a pixel has been "visited" (like a 2D array of Booleans). The algorithm then looks like this:

The shuffling of the neighbors is an important step (and yes, p5.js has a shuffle function). If you add them in the same order every time you will basically get a depth first search of the space and while it will be slightly more coherent than the totally naive "lawnmower" approach, the result will bear a strong resemblance.

Interestingly, if you use a queue instead of a stack, you will get a completely different (though still compelling) image.

You will find that in the template code, I've filled in a little bit more than the bare bones. Some of what I have given you is the image loading code that you are already familiar with. I have also sketched in the analysis function for you.

As you might imagine, visiting every pixel and building a map of color co-occurrence is a costly function. To help alleviate that I added a line that resizing the image down to 400 pixels wide (height is set automatically). If your computer is very slow, you may want to make this even smaller. While we are throwing out a lot of information, the dominate colors will still be similarly related.

You are, of course, welcome to innovate beyond these requirements if inspiration strikes.